The Children’s Hospital in Boston, Mass. is the nation’s foremost pediatric care facility.

The Children’s Hospital in Boston, Mass. is the nation’s foremost pediatric care facility. To serve the needs of patients and families, it is undertaking expansion by constructing a new state-of-the-art clinical building in the Longwood Medical Area, which will rise eleven stories and have four below-ground levels. Treviicos, subcontracted to JF White second tier subcontracted to Suffolk, has played an important role in the construction project by providing the slurry walls needed to create the below-ground levels.

The task entailed excavating and pouring 54 panels, all 36 inches thick, ranging from an average depth of 72.6 feet to a maximum of 91 feet and a minimum length of 8 feet and 2 inches to a maximum of 24 feet.

Typical of that area of Boston, the geology was characterized by different formations, including fill, marine deposits, glaciofluvial deposits, glacial till, weathered bedrock, and bedrock.

The bedrock, which was essentially a sedimentary formation (conglomerate), in certain areas was mixed with metamorphic formations of highly abrasive diabase with a compressive strength up to 30,000 PSI. This formation, in particular, created challenges due to the length of time required for excavating the panels, in some cases several days.

The Children’s Hospital project also posed some logistical challenges since the footprint of the site was relatively small versus the size of the building. This implied installing a bentonite plant in the middle of the site, which hindered the free movement of the different machines, the result being that each task the machines performed had to be studied in detail. The site configuration also meant that safety was another important aspect to be carefully evaluated and implemented. Moreover, given the location, monitoring of air quality and mitigation of noise were also factors to consider.

Despite these challenges, work proceeded successfully and was completed in late May 2018. 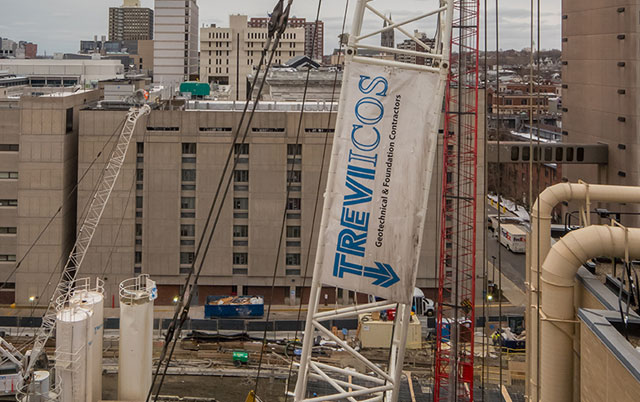