August 14, 2014 - Construction of a barrier to prevent seepage at Bolivar Dam will begin in December. Site preparation is already underway.

Construction of a $44.3 million barrier to prevent seepage at Bolivar Dam will begin in December. Site preparation is already underway. The project is expected to take four years to complete and will involve building a concrete barrier inside the earthen dam that will be almost a mile long, 3 feet thick and 145 feet deep.

Treviicos South of Charlestown, Massachusetts, has been awarded the contract by the U.S. Army Corps of Engineers. The dam, located a mile upstream of Bolivar on Sandy Creek, is a “dry dam” that impounds water only during floods. Corps officials saw a great deal of seepage during a flood in 2005, when the dam was at its record pool. Corps officials updated members of the public on the project at a meeting Wednesday night at the Bolivar Fire Department.

Ken Woodard, the project manager, said seepage has been a problem at Bolivar Dam since it was constructed in the late 1930s. “Seepage could undermine the dam,” he said. Its failure would impact tens of thousands of people, as well as Interstate 77 and Dover Dam, and would cause more than $1 billion in damage.

The dam has a Classification 2 rating, which means that repairs are a high urgency, said Seth Lyle, a geotechnical engineer for the corps. The seepage barrier will be built on the upstream side of the dam and will cut off water flow through the most pervious part, he said.

“You won’t see a lot of the structure,” Jeff Taylor, a Treviicos representative told those in attendance. “The work will be done underground.” He noted that his company has worked on many construction projects for the corps. 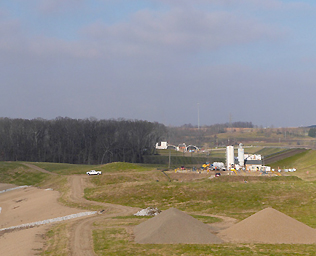